{% set headerFontFamily = "Lato" %} /* This affects only headers on the site. Add the font family you wish to use. You may need to import it above. */

After you have updated your stylesheet, make sure you turn this module off

The first part of this article series covered the basics of FinCEN cryptocurrency regulation and provided a deeper insight into four key considerations for money services businesses, especially in the field of FinTech. In this part, we take a closer look at one of the most important aspects of FinCEN regulation – the FinCEN Funds Transfer Rule. 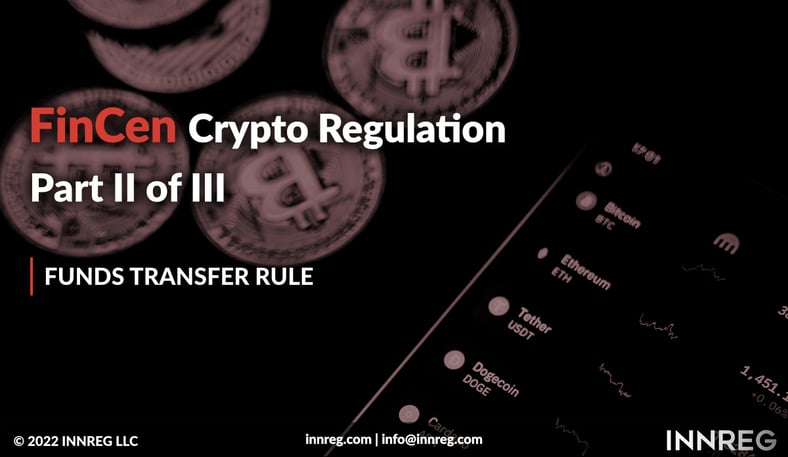 The FinCEN Funds Transfer Rule is also known as the Travel Rule that requires financial institutions to collect and retain certain information related to funds transfers and transmittals. On March 15, 2019, FinCEN Director Kenneth A. Blanco was speaking at a Blockchain Symposium when he stated that the FinCEN Funds Transfer Rule should apply to all CVCs. Mr. Blanco also stated that: “FinCEN, through delegated examiners at the Internal Revenue Service, has been conducting examinations that include compliance with the Funds Travel Rule since 2014. In fact, to date, it is the most commonly cited violation by the IRS against MSBs engaged in CVC money transmission”.

Mr. Blanco’s comments were made following the release of FinCEN’s 2019 guidance on the application of AML rules, including the Travel Rule, to businesses engaging in virtual currency activities. Moreover, in the same year, the Financial Action Task Force (FATF), which combats money laundering and terrorism financing, issued its FATF Recommendation 16, which requires Virtual Asset Service Providers to share Know-Your-Customer (KYC) and Personal Identifiable Information data between the transacting receivers and senders before the transaction is executed. Virtual Asset Service Providers are, among others, cryptocurrency exchanges, custody providers, and Bitcoin ATMs.

In 1995, the Board of Governors of the Federal Reserve and FinCEN issued a joint Rule for banks and other non-bank financial institutions. This Rule had to do with the information required to be included on transfers of funds and is made up of two parts – the Recordkeeping Rule and the Travel Rule.

FinCEN made clear that the financial institution of the recipient should retain the same information as the originator, as long as that information has been provided by the originating MSB.

2020 Modifications and Updates to the Rules

The Board of Governors of the Federal Reserve System and FinCEN issued a joint Notice of Proposed Rulemaking (NPRM) in October of 2020. The authorities sought to gather public comments on proposed amendments seeking to modify the Recordkeeping and Funds Transfer Rules by:

Later, in December of 2020, FinCEN issued an NPRM that would mandate cryptocurrency exchanges, banks, and MSBs to gather KYC data on any person transferring crypto equivalent to or greater than $3,000 in value, both from or to a private wallet. The NPRM would also require MSBs and banks to gather, maintain, and report all information about customers that take part in virtual currency transactions with unhosted wallets.

Equivalent requirements would also be placed on hosted wallet transactions held by a financial institution to which the BSA does not apply and that are located in any of the jurisdictions found on the FinCEN Foreign Jurisdictions List.

The NPRM would mean that impacted businesses would have to increase their KYC efforts - by collecting and storing data on, as well as reporting on more transactions than ever before. This would only increase the pressure on companies to invest more efforts in order to remain compliant.

The Funds Transfer Rule could structurally change how Virtual Asset Service Providers operate going forward. As documented by FATF, the best way of preparing for this is for cryptocurrency exchanges to utilize a risk-based approach based on FinCEN’s guidelines and have clear and defined procedures and policies in place. For example:

The best way to ensure compliance with FinCEN Funds Transfer Rule is to have a strong Customer Due Diligence (CDD) and KYC process that collects crucial information while onboarding customers. The most advisable course of action is to engage an established, experienced expert on the matter, thus ensuring that your business is in good hands and remains fully compliant.